A statement of facts is a legal document which sets forward factual information without argument. These documents are used in a variety of legal settings, ranging from appeals to filing vehicle registration paperwork. The goal of a statement of facts is not to put forward an argument, but rather to present factual information in a clear, easy to understand way. That said, many lawyers may make implicit arguments in a statement of facts, using a variety of tricks to sway the reader to one point of view or another. Typically these arguments are designed to paint someone in a favorable light, or to dismiss the reliability of someone else.

Tragodía is composed of the three parts of an appellate brief: 1: Statement of Facts, which sets forth, in narrative form, the evidence of the crime as presented at trial; 2: Statement of the Case, which sets forth the procedural history of the case; and 3: Argument, which are the claims of error and (for the defense) the arguments for reversing the judgment. Place’s Statement of Facts project involves reproducing Statements of Facts from some of her appellate briefs and representing them as poetry.

Vanessa Place is a writer, a criminal appellate defense attorney, and co-director of Les Figues Press. Of Vanessa Place and Robert Fitterman’s Notes on Conceptualisms, Mary Kelly said, “I learned more about the impact of conceptualism on artists and writers than I had from reading so-called canonical works on the subject.” Place is author of Dies: A Sentence, La Medusa, Notes on Conceptualisms (co-authored with Robert Fitterman), Exposé des Faits, and The Guilt Project: Rape, Morality and Law. Other work includes the Factory Series of chapbooks and a sound collaboration with Stephanie Taylor, Murder Square Dance on the Spiral Jetty (both with oodpress).

You might have supposed that the hallowed technique of cultural appropriation had exhausted itself in the wake of the Duchampian ready-made, the spend-thrift citations of Pop, Burrough’s lapidary cut-ups, or the critical twist given to all this by New York postmodernism in the 80s. But by re-presenting appellate briefs of sexual offense cases, attorney-cum-wordsmith, Vanessa Place has come up with another take on taking. Here the uncanny juggernaut of the Law collides with the excruciating strengths and fragilities of victims, voice is overwritten by context, and morality by salient indignation. In other circumstances we would take our hats off, but given her profession, she deserves a citation.
—John Welchman

By repurposing legal prosecution and defense documents of violent sexual crimes verbatim, Statement of Facts takes on issues too messy to benefit from further elucidation which only grow more disturbing presented in their purest case material form. For some, what Statement of Facts brings into the public square is salacious, but Place is in effect saying: ‘I move the ball out of this arena and take it into this arena’ in order to pump up the socio political volume on this legal/moral battlefield. Her definition of injustice is sweeping. Statement of Facts does not care what the reader thinks about content and in essence, Place’s relationship to content is like Oprah Winfrey’s to money. It is straightforward, and you are free to project onto it whatever you need to. However you respond to this fierce book, it is indisputable that Statement of Facts has carved out a place for itself as a touchstone of poetic push back. As Pasadena Superior Court Judge Gilbert Alston famously quipped in his dismissal of a 1986 rape case because the victim was a prostitute: ‘A whore is a whore is a whore’—Statement of Facts counters by unflinchingly reminding us ‘a rape is a rape is a rape.’
—Kim Rosenfield


The heart of this project is Statement of Facts, Place’s poetic assemblage of narratives taken from court testimonies dealing with the appeals cases of sexual offenders. Place, herself an appellate attorney in Los Angeles, shows that a narrative built entirely on the facts (in this case, of testimony in the cases of felons convicted of rape) can be more intriguing, enticing, and devastating than the most elaborate fiction. The second volume, Statement of the Case, sets forward the procedural history of the case, and the third, Argument, gives us the claims of error and (for the defense) the arguments for reversing judgment. To read Tragodia is to learn that nothing is black and white, that in crime as in «evidence» and explanation, mystery and complexity reign. 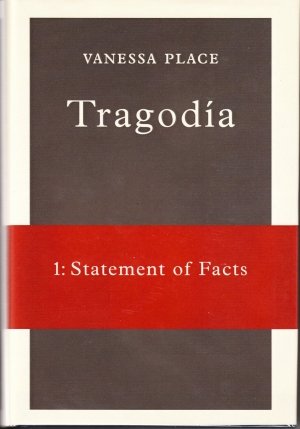 Vanessa Place
The Allegory and the Archive