A poem is often read as a set of formal, technical, and conventional devices that generate meaning or affect. However, Lucy Alford suggests that poetic language might be better understood as an instrument for tuning and refining the attention. Identifying a crucial link between poetic form and the forming of attention, Alford offers a new terminology for how poetic attention works and how attention becomes a subject and object of poetry.

Forms of Poetic Attention combines close readings of a wide variety of poems with research in the philosophy, aesthetics, and psychology of attention. Drawing on the work of a wide variety of poets such as T. S. Eliot, Wallace Stevens, Frank O’Hara, Anne Carson, Theresa Hak Kyung Cha, Harryette Mullen, Al-Khansā’, Rainer Maria Rilke, Arthur Rimbaud, and Claudia Rankine, Alford defines and locates the particular forms of attention poems both require and produce. She theorizes the process of attention-making—its objects, its coordinates, its variables—while introducing a broad set of interpretive tools into the field of literary studies. Forms of Poetic Attention makes the original claim that attention is poetry’s primary medium, and that the forms of attention demanded by a poem can train, hone, and refine our capacities for perception and judgment, on and off the page.

Lucy Alford is assistant professor of literature at Wake Forest University. Her poems have appeared in Harpur Palate, Literary Matters, the Warwick Review, Streetlight, and Atelier. 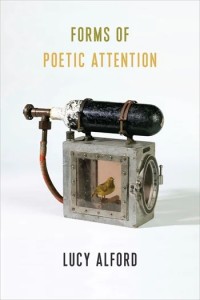