CAConrad did 36 rituals a day for 36 days in Marfa, Texas, taking notes between each ritual, the notes harvested later for the poems contained here in Circle M. Some of these rituals include watching 36 installments (about 5 minutes per installment) of the film GIANT, filmed in Marfa in 1955, starring James Dean, Elizabeth Taylor, and Rock Hudson. Conrad also dressed a sweet potato in a purple skirt and carried her around town to have conversations with strangers about identity and potato avatars. He sang to chickens, infused his food with crystals and Yoko Ono’s music, 36 rituals in all, the notes later coming together to make 36 poems.

CAConrad’s childhood included selling cut flowers along the highway for his mother and helping her shoplift. He is the author of eight books of poetry and essays, the latest, ECODEVIANCE: (Soma)tics for the Future Wilderness (Wave Books), is the winner of the 2015 Believer Magazine Book Award. He is a Pew Fellow and has also received fellowships from Lannan Foundation, MacDowell Colony, Headlands Center for the Arts, Banff, and Ucross. For his books and details on the documentary The Book of Conrad (Delinquent Films, 2016), please visit CAConrad.blogspot.com. 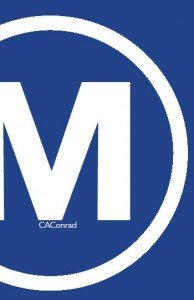 CAConrad
While Standing in Line for Death