Self-styled writer Grace Cleave has writer’s block, and her anxiety is only augmented by her chronic aversion to leaving her home, to be “among people, even for five or ten minutes.” And so it is with trepidation that she accepts an invitation to spend a weekend away from London in the north of England. Once there, she feels more and more like a migratory bird, as the pull of her native New Zealand makes life away from it seem transitory. Grace longs to find her place in the world, but first she must learn to be comfortable in her own skin, feathers and all.

From the author of An Angel at My Table comes an exquisitely written novel of exile and return, homesickness and belonging. Written in 1963 when Janet Frame was living in London, this is of a novel she considered too personal to be published while she was alive.

New Zealand writer Janet Frame (1924–2004) will stand as one of the most sensitive, forthright, and adventurous illuminators of human consciousness. The author of many celebrated novels, stories, and a three-volume autobiography, Frame survived a turbulent and tragic childhood, mental illness, and nearly disastrous medical treatment to reap numerous awards. The cost of literary success is the subject of this 1963 novel, appearing for the first time in the U.S., about a writer, Grace Cleave, who has left sunny, lush New Zealand for sooty, crushing London. Grace accepts an invitation to spend a weekend with a kind journalist and his family in the country, then fails miserably to overcome her debilitating self-consciousness. Equally flummoxed by the snowy landscape and the warmth of Philip’s household, she turns incoherent and retreats into all-consuming memories of her childhood. So revealing is this moody, metaphysical, and rhapsodic novel, Frame set it aside. Wisely rescued and posthumously published, this exquisite portrait of a mind under pressure will revitalize appreciation for a poetic master stylist, sharp wit, deep thinker, and consummate artist. --Donna Seaman


Published posthumously in 2008, this short Janet Frame novel was written in 1963, but withheld from publication because it was too painfully real. The book is an account of a short, painful weekend. Living in London and trying to launch her writing career, Frame finds herself estranged in a strange land. Then 30 years old, she’d lost a whole decade wrongly incarcerated for mental illness in New Zealand, an experience she describes in her first novel, Owls Do Cry. Frame was painfully shy, and Towards Another Summer is an excruciatingly microscopic account of a weekend she spent with a journalist who, trying to be kind, invited her to spend a weekend with his young family in their country home. From the moment the narrator gets off the train, each interaction with her hosts proves a painful ordeal. Should she help with the dishes? Is it okay to go for a walk? The novel demonstrates how diffuse anguish can be, when tormented by thousands of tiny contingencies. Should I leave my toothbrush out in the bathroom? What will my hosts think? Do they feel sorry for me? 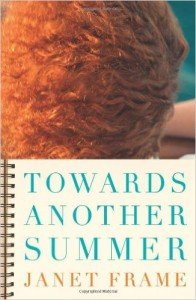