The Poems of T. S. Eliot is the authoritative edition of one of our greatest poets, scrupulously edited by Christopher Ricks and Jim McCue. It provides, for the first time, a fully scrutinized text of Eliot's poems, carefully restoring accidental omissions and removing textual errors that have crept in over the full century in which Eliot has been so frequently printed and reprinted. The edition also presents many poems from Eliot's youth which were published only decades later, as well as others that saw only private circulation in his lifetime, of which dozens are collected for the first time. To accompany Eliot's poems, Christopher Ricks and Jim McCue have provided a commentary that illuminates the creative activity that came to constitute each poem, calling upon drafts, correspondence and other original materials to provide a vivid account of the poet's working processes, his reading, his influences and his revisions. The first volume respects Eliot's decisions by opening with his Collected Poems 1909-1962 in the form in which he issued it, shortly before his death fifty years ago. There follow in this first volume the uncollected poems from his youth that he had chosen to publish, along with such other poems as could be considered suitable for publication. The second volume opens with the two books of poems of other kinds that he issued, Old Possum's Book of Practical Catsand his translation of Perse's Anabase, moving then to verses privately circulated as informal or improper or clubmanlike. Each of these sections is accompanied by its respective commentary, and then, pertaining to the entire edition, there is a comprehensive textual history recording variants both manuscript and published. The Poems of T. S. Eliot is a work of enlightening scholarship that will delight and inform all those who read Eliot for pleasure, as well as all those who read with pleasure and for study. Here are a new accuracy and an unparalleled insight into the marvels and landmarks from The Love Song of J. Alfred Prufrock and The Waste Land through to Four Quartets 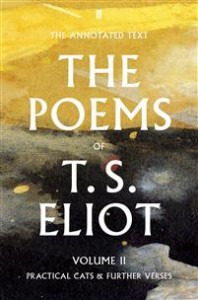