Lars Carlsson, born 1972, is a composer based in Gothenburg. Lars has been profiled on radio and TV on numerous occasions. The piano piece "Constructions for piano solo" was awarded first prize in a composer competition arranged by Musikspegeln, Sveriges Television. Lars Carlsson uses his creativity and free mind as a starting point for his creations. His inspiration is gathered from everyday life such as the sound of stone cutters at work and political thoughts. Lars is constantly working to break down the "traditional and hierarchical structures" his flow of ideas is constant and the resonant result is often of a conceptual character. Lars works with contemporary music but also with electro acoustic music, sound installations and beat-based electronica with improvisational elements. In 2004 Lars formed the text/sound duo MonoMono together with the poet Fredrik Nyberg. MonoMono has performed around 40 times in the Nordic countries, and all the concerts they perform are a part of the ongoing tour: "N o r d i c N e v e r e n d i n g E x t e n d e d T o u r".

About LAPLACES DEMON ELECTRONICA: The ideas behind the making of this music arose after I had installed encyclopedia software on my son Truls' computer. While trying out the program I discovered a button that randomly picked out words from the encyclopedia. After a few keystrokes on "random", the term "Laplaces Demon" appeared. I read the article, which I found incredibly captivating. This, to me, completely bizarre idea of Pierre Simon de LaPlace got me thinking of music as particles in motion. My music would thus be predetermined, in waiting for a higher "hypothetical" intellect. The movements that are now created in the air when my music is being played through different speakers in different locations have thereby been calculated a long time ago, regardless of how complex it is or how many layers it contains? When composing this music I embarked on a fantastic journey and for some reason the inspiration didn't cease; I felt that I with ease could create a substantial amount of materials towards the making of this record. LAPLACES DEMON ELECTRONICA contains 21 tracks that are tied together in one single flow, with 84 bpm and root note E in common. I felt early on that it had to be a completely electronic album since the flow of current that occurs in all electronic devices, circuits and processors when I work with various forms of crackling, noise, pulses, drones and feedback seemed like something that should be completely impossible to predict. A way to cheat LAPLACE. 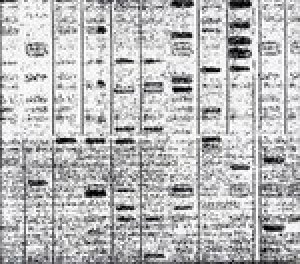