Stopped mid-motion in the middle
Of what we call a life, I looked up and saw no sky-
Only a dense cage of leaf, tree, and twig. I was lost.

Award-winning poet Mary Jo Bang has translated the Inferno into English at a moment when popular culture is so prevalent that it has even taken Dante, author of the fourteenth century epic poem, The Divine Comedy, and turned him into an action-adventure video game hero. Dante, a master of innovation, wrote his poem in the vernacular, rather than in literary Latin. Bang has similarly created an idiomatically rich contemporary version that is accessible, musical, and audacious. She's matched Dante's own liberal use of allusion and literary borrowing by incorporating literary and cultural references familiar to contemporary readers: Shakespeare and Dickinson, Freud and South Park, Kierkegaard and Stephen Colbert. The Inferno--the allegorical story of a spiritual quest that begins in a dark forest, traverses Hell's nine circles, and ends at the hopeful edge of purgatory--was also an indictment of religious hypocrisy and political corruption. In its time, the poem was stunningly new. Bang's version is true to the original: lyrical, politically astute, occasionally self-mocking, and deeply moving. With haunting illustrations by Henrik Drescher, this is the most readable Inferno available in English, a truly remarkable achievement.

Dante Alighieri (c.1265-1321) is the author of The Divine Comedy, a masterpiece of world literature. Mary Jo Bang is the author of six books of poetry, including Elegy, winner of the National Book Critics Circle Award.

«National Book Critics Circle Award-winning poet Bang (Elegy) offers an original and idiosyncratic version of the first part of Dante's Divine Comedy. Working from various English translations and the original, Bang seeks to bring out Dante's contemporary relevance by a frequent use of current idiom, borrowing from or transferring Dante's imagery to modern circumstances. Where Dante often quoted poet-songwriters of his day, Bang uses relevant passages from John Coltrane, Bob Dylan, and the Beatles. In a process of reverse reference, where many modern poets, such as T.S. Eliot and Sylvia Plath, quoted or paraphrased Dante, Bang puts these paraphrases back into the original. Her verse is vigorous, her imagery enjoyable and astute. Still, while her notes explain modern references, her knowledge of contemporary Dante scholarship is limited. The book is richly illustrated by Drescher, whose children's books include Love the Beastie and The Fool and the Flying Ship. VERDICT For readers already familiar with Dante, this is a rich, playful, and insightful poetic reading, true to the spirit if not the word. Those seeking a conventionally accurate translation should instead go to Mark Musa, Robert Pinsky, or Robert Hollander.»


There are so many translations of Dante that one wonders, why one more? But Mary Jo Bang’s is unique: She faithfully follows the narrative and central imagery of the Italian text and yet brings it into the present by using contemporary syntax and argot so that Dante’s stories are made entirely new – and very dramatic. The famous stories – e.g. Paulo and Francesca – thus become quite graphic.  Bang also has great notes on the various cruxes in the Inferno. 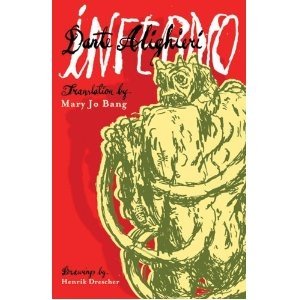