This record represents a fairly radical departure for me in terms of working process. Whereas my last record – Last Night On Earth – was basically the product of a band playing ‘live’ in the studio, Electric Trim took a very different path. This record was constructed by myself and co-producer Raul ‘Refree’ Fernandez of Barcelona, utilizing the studio in quite a different manner. Over the course of a year, from April 2015-May 2016, Raul and I built these songs from my rough acoustic demos. Using the studio as our tool, we layered guitars, drums and sampled sounds and electronic beats, and were excited by what we heard growing up around us. Working without a band, the songs were given room to grow as they each needed. It was a pretty fascinating process. Raul was pushing me and my music into all manner of new territory. It was a good challenge and came at a perfect time.

The sessions also incorporated the work of many players associated with my recent music. The members of The Dust, Alan Licht, Steve Shelley & Tim Luntzel, all played a hand in these recordings, as well as old friend Nels Cline and more recent friends Kid Millions and Sharon Van Etten, who sings on 6 songs, including a duet with me on 'Last Looks'.

The studio process was an exciting one –these sessions were some of the most challenging that I have ever been involved with, the most rewarding, and the most FUN as well. Holding up such great studio-crafted records as Pet Sounds and Revolver (for instance) as our models, we sought not to imitate but to be inspired by those sessions to see what we could do ourselves in terms of making maximum creative use of the studio environment. I feel the nine songs on Electric Trim represent my best work to date.

In addition to a new working process musically, I was interested in challenging myself lyrically as well. I wanted a collaborator, someone to bring in a different point of view, so all of the work – words and music – didn’t necessarily have to spring from my own head. The lyrics for six of the songs on the record were written in collaboration with American author Jonathan Lethem. Jonathan’s participation sent the work in new directions. We established a working process that proved very fruitful, with lyrics sometimes generated quite exclusively by one or the other of us, but just as often by passing sheets back and forth, both contributing, red-lining and rearranging until we were satisfied. It was haphazard in a very good and interesting way.

Both sides of the process creating this album – the music with Raul and lyrics with Jon – took me in new directions and out of my comfort zone. It was exciting; we didn’t always know what we were doing but we sure were digging what we heard developing.

The title “Electric Trim” came about by accident, it didn’t really mean anything or relate directly to any of the lyrics but it seemed to fit in some sort of poetic way. LATER, bassist Tim Luntzel informed me that “trim” is often slang for “pussy”! This I did not know. This enriched the phrase – we laughed at first but I liked the idea of Electric Trim even more once I knew that – it combined two very important rock n roll aspects – electricity and sex. The title stuck – and when I saw Richard Prince’s image of the tire tracks left on a country lane it someone implied that same rock n roll and sex to me and maybe a bit of wildness too that I felt fit the music we had created. 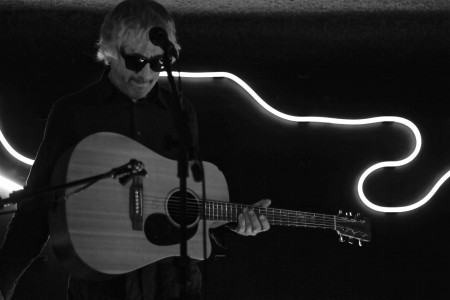