Published in 2011 by Editions du Seuil, Tarnac, un acte preparatoire interrogates in poetic form the fallout from and precedent for the notorious cause celebre of the "Tarnac Nine"--associated with the Invisible Committee, pseudonymous authors of The Coming Insurrection. It is his Anglo-American debut full-length, though as editor of the journal Nioques, he is well-known to American readers for, among other things, importing to France the work of some more daring poets from the U.S. Gleize's formulations of nudite and litteralite give some sense of his poetics, antithetical to the verse of flourish and ornament, but also to the performance of allusive depth and immanent ambiguity. Directness, detail, and documentation are keywords. In translation, TARNAC, A PREPARATORY ACT not only lends insight into radical aesthetic politics that characterize ongoing transatlantic--indeed global--intellectual affinities, but it introduces to American readers an inestimably important figure of French letters.About the translators: Bonnie Roy is a young scholar and poet specializing in contemporary work; Abigail Lang teaches at the Universite Paris-Diderot where she is a scholar of modernist poetry, and a noted translator of English-language poetry into French; Joshua Clover has published two volumes of poetry, Madonna anno domini and The Totality for Kids. His poems have also appeared three times in Best American Poetry, and he has written two books of film and cultural criticism: The Matrix and 1989: Bob Dylan Didn't Have This to Sing About. He teaches at the University of California, Davis."Can we situate an act of political autonomy in/as the provisional autonomy (surfaces) of a poem? // TARNAC, A PREPARATORY ACT riffs on/around a 2008 case against Julien Coupat, alleged leader of the Tarnac Nine, a putative 'anarchist' cell, who was accused of 'criminal conspiracy to commit a terrorist act.' // Jean-Marie Gleize considers the implication of an arrest for something 'preparatory, ' that is, something like speech. // Can a poem (a preliminary act) be insurrectionary?"--Charles Bernstein 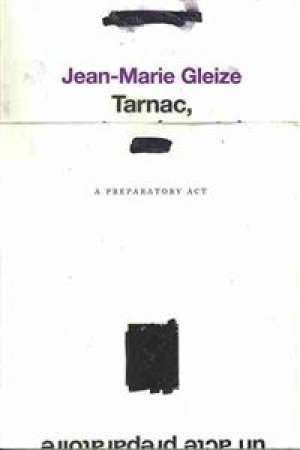