The anthology of the founder of the concrete poetry movement in Brazil. A bilingual edition in portuguese and french. Edited and translated by Jacques Donguy, who has also written the introduction.

For over four decades Brazilian poet Augusto de Campos has created some of the most interesting post World War II poetry to come out of South America. Famous for his poemas concretos (concrete poems), his work challenges genres by combining poetry and design, resulting in captivating visual writing. Numerous of these festive and polemic poetic representations have been recently published in an anthology of Campos’ work, Poètemoins Anthologie which transcribes some of his poemas concretos to the French language.

Born 1931 in São Paulo, Augusto de Campos is, with his brother Haroldo, one of the founders of the concrete poetry movement in Brazil. He is also a translator, music critic and visual artist. From 1980 Augusto de Campos has worked intensively with new media and has presented his poems in the form of video-texts, neon lights, electrical panels, holograms, laser lights, infographics and multimedia elements.


If you can’t read Portuguese (I can’t), this bilingual edition (Portuguese/French) by the poet Jacques Donguy will help you very much to understand what a remarkable varied poet we have in Augusto de Campos. A beautifully designed and delightful book that covers the various phases of de Campos’s career. 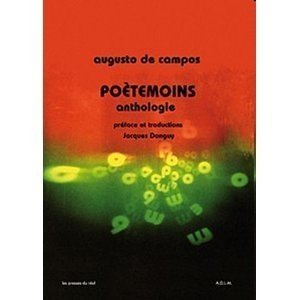