'Alice Miller's poetry delights in the music of surprise, often playing prosodic continuities against a percussive mise-en-page. It invites us into a deceptively transparent universe that must, in fact, be decrypted. Miller's is the universe of the butterfly effect, where intimately minor events in one continent have seismic consequences in another. She knows what is at stake in the infinitesimal, the split second, the infra-thin. The poems in her scintillating collection, Nowhere Nearer, make us aware of how precarious the earth's crust is, how treacherous the ambient oceans can be, and how ephemeral we ourselves are as we traverse great distances through the air. Birds, cities, relationships - all vanish in episodes of miniature apocalypse. The sensory richness of Miller's poetry - her gift for evoking place through texture and season, situation through detail and lacuna - only emphasises her conviction that all that was ever loved or cherished must be swallowed up by the flow of Lethe, the river of forgetfulness. Against this, she offers us the small-scale yet memorable redemptions of sensory beauty, unexpected metamorphosis, and the resilient will-to-narrate, its testimony refusing to slip out of sight or mind, or be blindsided by time: "The hold I have's not one I want to lose/ though it's caught in the flick of the clock through this blood."'Ranjit Hoskote 'Here is a poet who wants to "speak in our/plainest tongues" but who also aims "to sing my way out." Alice Miller looks hard at history's terrifying straight lines, yet time and again turns to the obsessive, sometimes redemptive circlings of art. She knows that in a universe ruled by time and death, words can both rescue and destroy us, sometimes in a single utterance.' --Bill Manhire

Alice Miller is a Berlin-based New Zealand poet. She is the author of 'The Limits' (Shearsman & Auckland University Press). Alice is a graduate of the Iowa Writers' Workshop and the International Institute of Modern Letters. Her work has appeared in 'Boston Review', 'Oxford Poetry', 'Poetry London', 'The Rialto', and 'The American Scholar'. She has received the BNZ Katherine Mansfield Award, the Royal Society of NZ Manhire Prize, a Glenn Schaeffer Fellowship, and has travelled to Antarctica courtesy of Antarctica NZ. She has also been a resident at the Michael King Centre, Massey University, the Grimshaw Sargeson Centre, and the Akademie Schloss Solitude. 'Blaue Stunde', an edition of her poems with a German translation, was published by Edition Solitude in 2016. 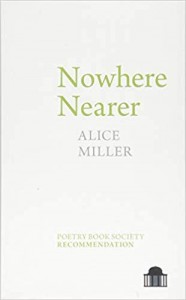