Just as Carl Andre's sculptures are «cuts» of elemental materials, his writings are condensed expressions, «cuts» of language that emphasize the part rather than the whole. Andre, a central figure in minimalism and one of the most influential sculptors of our time, does not produce the usual critical essay. He has said that he is "not a writer of prose," and the texts included in Cuts—the most comprehensive collection of his writings yet published—appear in a wide variety of forms that are pithy and poetic rather than prosaic. Some texts are statements, many of them fifty words or less, written for catalog entries and press releases. Others are Socratic dialogues, interwoven statements, or in the form of questionnaires and interviews. Still others are letters—public and private, lengthy missives and postcards. Some are epigrams and maxims (for example, on Damian Hirst: I DON'T FEAR HIS SHARK. I FEAR HIS FORMALDEHYDE) and some are planar poems, words and letters arranged and rearranged into different patterns. They are organized alphabetically by subject, under such entries as «Art and Capitalism», «Childhood», «Entropy (After Smithson)», «Matter», «My Work», «Other Artists», and «Poetry», and they include Andre's reflections on Michelangelo and Duchamp, on Stein and Marx, and such contemporaries as Eva Hesse, Robert Smithson, Robert Morris, and Damien Hirst.

Carl Andre's writing and its materiality—its stress on the visual and tactile qualities of language—takes its place beside his sculpture and its materiality, its revelation of «matter as matter rather than matter as symbol». Both assert the ethical and political primacy of matter in a culture that prizes the replica, the insubstantial, and the virtual. «I am not an idealist as an artist», says Andre. «I try to discover my visions in the conditions of the world. It's the conditions which are important».

Carl Andre is a sculptor and poet.


James Meyer is Associate Professor of Art History at Emory University. He is the author of Minimalism: Art and Polemics in the Sixties and the editor of The AIDS Crisis is Ridiculous and Other Writings 1986-2003 by Gregg Bordowitz (MIT Press, 2004).

«Such books are invaluable for the art historian, documenting ideas in gestation and formation, and for the general art reader in revealing something of the persona of the artist.»
—Detroit Metro Times

«Andre's work, like his writing, is composed of separate pieces - cuts - reassembled in a playful and thoughtful way.»
—Afterimage


The American Sculptor Carl Andre turns out to also be a major art theorist/poetician. His interviews, dialogues with Hollis Frampton, and statements about art are beautifully assembled here by James Meyer. I found the book an eye-opener. Andre was largely an auto-didact; he had absorbed so much poetry and really understands how language works. 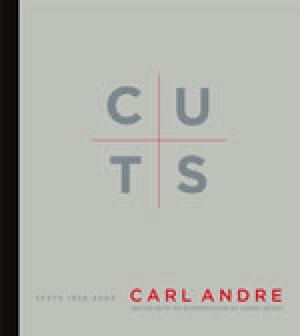