The Book of a Thousand Eyes

Written over the course of two decades, The Book of a Thousand Eyes was begun as an homage to Scheherazade, the heroine of The Arabian Nights who, through her nightly tale-telling, saved her culture and her own life by teaching a powerful and murderous ruler to abandon cruelty in favor of wisdom and benevolence. Hejinian’s book is a compendium of “night works”—lullabies, bedtime stories, insomniac lyrics, nonsensical mumblings, fairy tales, attempts to understand at day’s end some of the day’s events, dream narratives, erotic or occasionally bawdy ditties, etc. The poems explore and play with languages of diverse stages of consciousness and realms of imagination. Though they may not be redemptive in effect, the diverse works that comprise The Book of a Thousand Eyes argue for the possibilities of a merry, pained, celebratory, mournful, stubborn commitment to life.

Lyn Hejinian is a poet, essayist, teacher, and translator. Her most recent published book of poetry is Saga / Circus (2008). Her compendium of “night works” titled The Book of a Thousand Eyes will appear in the early spring of 2012 from Omnidawn. Other books include A Border Comedy (Granary Books, 2001), Slowly and The Beginner (both published by Tuumba Press, 2002), and The Fatalist (Omnidawn, 2003). The University of California Press published a collection of her essays entitled The Language of Inquiry in 2000. Hejinian is also actively involved in collaboratively created works, the most recent examples of which include a major collection of poems by Hejinian and Jack Collom titled Situations, Sings (Adventures in Poetry, 2008). Other collaborative projects include a work entitled The Eye of Enduring undertaken with the painter Diane Andrews Hall and exhibited in 1996; a composition entitled Qúê Trân with music by John Zorn and text by Hejinian; two mixed media books (The Traveler and the Hill and the Hill and The Lake) created with the painter Emilie Clark; the award-winning experimental documentary film Letters Not About Love, directed by Jacki Ochs; and The Grand Piano: An Experiment in Collective Autobiography, co-written with nine other poets. Translations of her work have been published in Denmark, France, Spain, Japan, Italy, Russia, Sweden, China, Serbia, Holland, China, and Finland. She is the recipient of a Writing Fellowship from the California Arts Council, a grant from the Poetry Fund, and a Translation Fellowship (for her Russian translations) from the National Endowment for the Arts; she received an Award for Independent Literature from the Soviet literary organization “Poetic Function” in Leningrad in 1989. She has traveled and lectured extensively in Russia as well as Europe, and Description (1990) and Xenia (1994), two volumes of her translations from the work of the contemporary Russian poet Arkadii Dragomoshchenko, have been published by Sun and Moon Press. Since 1976 Hejinian has been the editor of Tuumba Press and from 1981 to 1999 she was the co- editor (with Barrett Watten) of Poetics Journal. She is also the co-director (with Travis Ortiz) of Atelos, a literary project commissioning and publishing cross-genre work by poets. She is currently serving as a Chancellor of the Academy of American Poets. She teaches in the English Department at the University of California, Berkeley, and is the Chair of the UC-Berkeley Solidarity Alliance, an activist coalition of union representatives, workers, staff, students, and faculty fighting to maintain the accessibility and affordability of public higher education in California.

Praise for The Book of a Thousand Eyes:

For Lyn Hejinian the concept “everything” or “everything living” is the greatest seduction. In this book of tales, poems, polemics, lullabies, treatises, asides (the behavior of birds, the behavior of ghosts; the dramas of capital, species, percipient individual), “everything” is captive to life and continuation is queen. Like Scheherazade’s ploy, to which it more than nods, The Book of a Thousand Eyes spins out scene after moral after speculation merely for the payoff one wakes to daily—the privilege of beginning again. “Nothing has been proved,” of course, but the combined exhilaration and outrage of what experience means in the language of the twenty-first century is robustly nailed in this book. “Sleep,” Hejinian says, “can’t put interpretation to rest”—far from it; regardless of which consciousness these antic and anti-summary works probe, they propose the very opposite of rest. Hejinian’s sallies are at once pragmatic, mysterious, and an utter delight to read. – Jean Day

A third of the way into The Book of a Thousand Eyes comes the question, “Isn’t sleep fitted to this world?”  And the easy answer—abundantly Yes—both masks and unveils the bigger shape.  (As the Earl of Anglesey noted, “To this Rhetorical Question the Commons pray they may Answer by another Question.”)  The devil’s in the details every night, all night.  Lyn Hejinian knows that familiarity breeds the predictable but she knows as well that—and how—“contact produces uncertainty.”  So this is a brilliantly uncertain book, a book of practical and fantastic connection, connection as multiple and as hopeless as love might be, connection as big and leggy as the night is long.  Here, the old bifurcations and faultless authorities are broken down into a continuous waking hour.  Waking?—owl-like, magnificent, traveling.  Continuous?—“Our sleep has no conclusion.”  This book is night itself.— C. S. Giscombe

A brief interview with Lyn Hejinian
(conducted by Rusty Morrison)

What aspects of your history and/or what particular obsessions of yours do you see apparent in The Book of a Thousand Eyes?

Written over the course of two decades, The Book of a Thousand Eyes was begun as an homage to Scheherazade, the heroine of The Arabian Nights who, through her nightly tale-telling, saved her culture and her own life by teaching a powerful and murderous ruler to abandon cruelty in favor of wisdom and benevolence. I see The Book of a Thousand Eyes as a compendium of “night works”—lullabies, bedtime stories, insomniac lyrics, nonsensical mumblings, fairy tales, attempts to understand at day’s end some of the day’s events, dream narratives, erotic or occasionally bawdy ditties, etc. The poems explore and play with languages of diverse stages of consciousness and realms of imagination. Though they may not be redemptive in effect, the diverse works that comprise The Book of a Thousand Eyes argue for the possibilities of a merry, pained, celebratory, mournful, stubborn commitment to life.

Some readers may want to read my essay “La Faustienne” (in The Language of Inquiry) to learn more about my interest in the Scheherazade figure and its relation to the Faust figure that plays such a foundational role in Western literature. As I points out in the essay, the two share several remarkable features. The medieval Faustbook (a compilation of stories about magic and magicians) was the basis for Goethe’s and for Christopher Marlowe’s respective plays about the titular hero in quest of knowledge (for which he sells his soul in the process). The Arabian Nights (or The Thousand Nights and One Night) is similarly a compilation of stories about knowledge, but in this case it tells of the bestowing of knowledge (by a woman named Scheherazade, who is described, in the “back story” introduction to the unexpurgated, full version of the work, as the wisest person in all the land who knew all stories and all the ways of men and women and djinis, etc). The Faust story is about Western man’s rapacious quest for knowledge at all costs; the Scheherazade story is about an Eastern woman’s generous gift of knowledge to a tyrannical ruler who is made kind and wise by it.

One can discern the feminist undercurrent here.

How might you compare this book to your previous books?

This is perhaps my most accessible book of poetry, and as such, even as it will be of interest to readers of experimental poetry, it may interest a more general readership.

How did this book come to its title? Why did you choose this title?

The title of the book makes a nod to The Arabian Nights, one of whose equally well-known titles is The Thousand Nights and A Night (the title that Sir Richard Burton, creator of its greatest English translation, gave it). It also alludes to “The Night Has a Thousand Eyes,” a popular Victorian-era poem by Francis William Bourdillon, whose opening lines are “The night has a thousand eyes / And the day but one.” The poem goes on to offer a parallel statement: “The mind has a thousand eyes / And the heart but one.” Bourdillon’s point is that the sun (as the one eye of the day) and love (as the one eye of the heart) are superior to the thousand eyes of night and the mind; I suggest that the multiple views available to the night and to the mind have something in their favor, too.

What interesting story might surprise readers about the inception or process of writing this book?

It took me 20 years to write this book, in large part because it spawned a number of books along the way. A Border Comedy, my 350 page book published in 2000, for example, grew out of what was to be a one-page addition to The Book of a Thousand Eyes. The Thousand Eyes project proliferated; it might be thought of as a source work, one element of a larger process, as well as a creative compendium in its own right

I should also mention this: since I worked for so many years on this book, portions of it have appeared in magazines and portions of it were included in my many poetry readings; as a result, this has become a long-awaited volume. 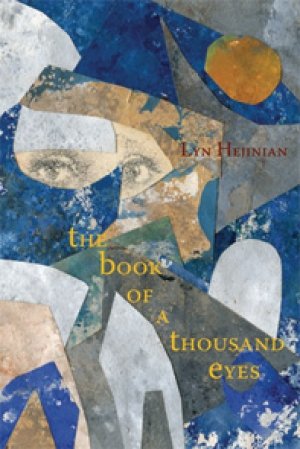 Juliana Spahr
This Connection of Everyone with Lungs