Following on from the acclaimed "Just Looking" and "Still Looking", "Always Looking" is an insightful collection of art criticism and a masterclass in appreciating art - from the great American man of letters, John Updike. "Always Looking" treats readers to a series of elegant and sensitive essays on art, and includes writing on a comprehensive array of subjects, both American and European.

In "The Clarity of Things", Updike looks closely at Copley, Homer, Abstract Expressionism, and Pop, in order to explore what is 'American' in American art. From here he moves to masterpieces of American and European art of the nineteenth and twentieth centuries - from the sublime landscapes of Frederic Church and the series paintings of Monet and Degas, to the verbal-visual puzzles of Magritte and the steely sculptural environments of Richard Serra. With more than two-hundred full-colour reproductions, "Always Looking" is an invitation to see the world afresh through the eyes of John Updike, a matchless connoisseur.

"Our time's greatest man of letters - as brilliant a literary critic and essayist as he was a novelist and short-story writer. His death constitutes a loss to our literature that is immeasurable". (Philip Roth). "He was a modern master, a colossal figure in American letters, the finest writer working in English. He dazzled us with his interests and intellectual curiosity, and he turned a beautiful sentence". (Ian McEwan). "Updike was that rare creature: an all-around man of letters, a literary decathlete who brought to his criticism an insider's understanding of craft and technique; a first-class appreciator of talent, capable of describing other artists' work with nimble, pictorial brilliance; an ebullient observer, who could bring to essays about dinosaurs or golf or even the theory of relativity a contagious, boyish sense of wonder". (Michiko Kakutani, "New York Times"). 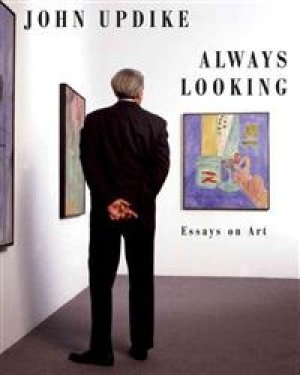