If Beale Street Could Talk

We are in Harlem, the black soul of New York City, in the era of Aretha Franklin and Ray Charles. The narrator of Baldwin's novel is Tish nineteen, and pregnant. Her lover Fonny, father of her child, is in jail accused of rape. Flashbacks from their love affair are woven into the compelling struggle of two families to win justice for Fonny. To this love story James Baldwin brings a spare and impassioned intensity, charging it with universal resonance and power.

Born in Harlem in 1924, James Baldwin was a novelist, essayist, play­wright, poet, social critic, and the author of more than twenty books. His first novel, Go Tell It on the Mountain, appeared in 1953 to excellent reviews, and his essay col­lection The Fire Next Time was a bestseller that made him an influential figure in the civil rights movement. Baldwin spent many years in France, where he moved to escape the racism and homophobia of the United States. He died in 1987. 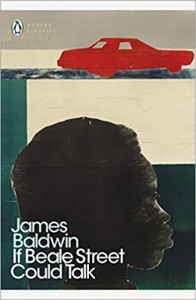 James Baldwin
The Fire Next Time

James Baldwin
Go Tell it on the Mountain