The Heretic’s Guide to Global Finance: Hacking the Future of Money

Popular anger against the financial system has never been higher, yet the practical workings of the system remain opaque to many people. The Heretic's Guide to Global Finance aims to bridge the gap between protest slogans and practical proposals for reform. Brett Scott is a campaigner and former derivatives broker who has a unique understanding of life inside and outside the financial sector. He builds up a framework for approaching it based on the three principles of 'Exploring', 'Jamming' and 'Building', offering a practical guide for those who wish to deepen their understanding of, and access to, the inner workings of financial institutions. Scott covers aspects frequently overlooked, such as the cultural dimensions of the financial system, and considers major issues such as agricultural speculation, carbon markets and tar-sands financing. Crucially, it also showcases the growing alternative finance movement, showing how everyday people can get involved in building a new, democratic, financial system.


Brett Scott’s The Heretic's Guide to Global Finance (Hacking the Future of Money) is an absorbing introduction to the contemporary financial system and also a sort of handbook for media-activists who want to gain access to the dominant form of economic power in order to disrupt it. The book is essential reading for those who want to understand the possible future of alternative currencies. 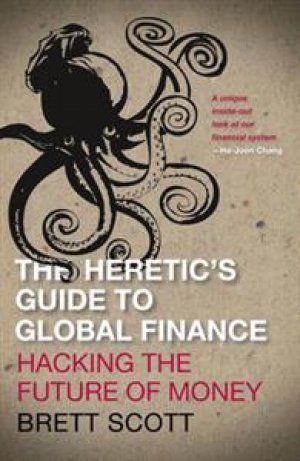