Enrichment: A critique of commodities

This book offers a major new account of modern capitalism and of the ways in which value and wealth are created today. Boltanski and Esquerre argue that capitalism in the West has recently undergone a fundamental transformation characterized by de-industrialization, on the one hand, and, on the other, by the increased exploitation of certain resources that, while not entirely new, have taken on unprecedented importance. It is this new form of exploitation that has given rise to what they call the 'enrichment economy'.

As opportunities to profit from the exploitation of industrial labour began to diminish, capitalism shifted its focus to expand the range of things that could be exploited. This gave rise to a plurality of different forms for making things valuable - valuing objects in terms of their properties is only one such form. The form that plays a central role in the enrichment economy is what the authors call the 'collection form', which values objects based on the gap they fill in a collection. This valuation process relies on the creation of narratives which enrich commodities.

This wide-ranging and highly original work makes a major contribution to our understanding of contemporary societies and of how capitalism is changing today. It will be of great value to students and scholars in sociology, political economy and cultural studies, as well as to anyone interested in the social and economic transformations shaping our world. 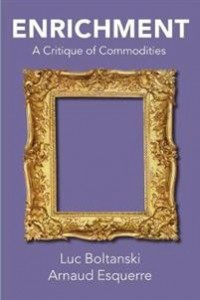