Earn Your Milk contains all the uncollected prose works of Tom Raworth, gathering together "Letters from Yaddo", "The Vein" and "Letter to Martin Stannard" with his uncategorizable prose-work "A Serial Biography", an extraordinary assembly memoir and reportage. This invaluable collection now makes widely available work which was previously hard to obtain or long out of print, it will delight fans as well as general readers wanting to discover more about one of the UK's most widely-celebrated poets. Tom Raworth was born in London just before the Second World War and has done everything wrong since. For half-a-century he has printed, published, translated and written poetry; has occasionally taught in several countries; and has read his own work and performed with other artists all over the world. He has a taste for spicy food from his father's service in Burma and a quick temper from his Irish mother. He is at the moment of no fixed abode. In 2007, in Modena, he was awarded the Antonio Delfini Prize for 'lifetime career achievement' though as he remarks 'he is not yet dead'.

Tom Raworth was born and grew up in London. During the 1970s he travelled and worked in the USA and Mexico, returning to England in 1977 to be Resident Poet at King's College, Cambridge, in which city he still lives. Since 1966 he has published more than forty books and pamphlets of poetry, prose and translations, in several countries. His graphic work has been shown in France, Italy, and the USA, and he has collaborated and performed with musicians (Steve Lacy, Joëlle Léandre, Steve Nelson-Raney, Esther Roth, Nino Locatelli), painters (Giovanni D'Agostino, Micaëla Henich), and other poets (Franco Beltrametti, Corrado Costa, Dario Villa).


Contains the wonderful, long out-of-print «Serial Biography» where this most elusive and indirect of poets produces a very moving memoir and I also love «Letters from Yaddo» – diary from the writer’s colony. 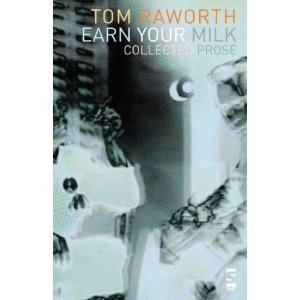