A Hotel With My Name: Collected Poems, Book 1

A Hotel With My Name contains the collected poetry of Cecilia Pavón originally published in Spanish in Argentina. This book is the first book in a 3 part series of the work of Cecilia Pavón that will be published by Scrambler Books and translated by Jacob Steinberg by the end of 2016.


Cecilia Pavon’s poems are pure happiness, although they aren’t always about happiness, or about happy things. Living and working in Buenos Aires, she writes poems that are at once simple, subtle, direct and uncanny. Sometimes emotion erupts, but she keeps her eyes moving, scanning the room and the sidewalks, the faces of friends. Poetically, she seems a close cousin of Dorothea Lasky’s. Her poems are like beachballs: primary colors in bright plastic strips, driven by winds and always aloft. Translator Jacob Steinberg recalls hearing her read in Buenos Aires when he was 19 - “something in my soul stirred; I felt less alone.” In this collection of poems published in Argentina between 1998-2002, he’s done a fabulous job at rendering her simple and feminine-not-feminized Spanish into compulsively readable English.  The poems draw you in.

Founding the legendary Belleza y Felicidad storefront cultural center, small press, gallery and store with her friend and sometime-collaborator Fernanda Laguna in 1999, Pavon’s poems reflect that era’s intense alternative scene of artists and intellectuals marooned by the economic crisis, without losing their singularity. As her friend, the writer Cesar Aira has written, Pavon’s triumph is one of creating “a world within a world.” 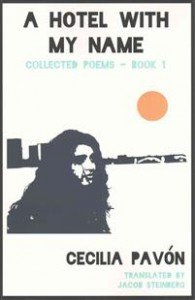