The Uprising is an Autonomist manifesto for today's precarious times, and a rallying cry in the face of the catastrophic and irreversible crisis that neoliberalism and the financial sphere have established over the globe. In his newest book, Franco "Bifo" Berardi argues that the notion of economic recovery is complete mythology. The coming years will inevitably see new surges of protest and violence, but the old models of resistance no longer apply. Society can either stick with the prescriptions and "rescues" that the economic and financial sectors have demanded at the expense of social happiness, culture, and the public good; or it can formulate an alternative. For Berardi, this alternative lies in understanding the current crisis as something more fundamental than an economic crisis: it is a crisis of the social imagination, and demands a new language by which to address it. This is a manifesto against the idea of growth, and against the concept of debt, the financial sector's two primary linguistic means of manipulating society. It is a call for exhaustion, and for resistance to the cult of energy on which today's economic free-floating market depends.To this end, Berardi introduces an unexpected linguistic political weapon--poetry: poetry as the insolvency of language, as the sensuous birth of meaning and desire, as that which cannot be reduced to information and exchanged like currency. If the protests now stirring about the world are to take shape and direction, then the revolution will be neither peaceful nor violent--it will be linguistic, or will not be at all. 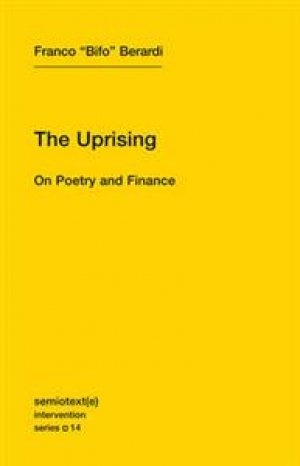