This is Not a Program

Historical conflict no longer opposes two massive molar heaps, two classes--the exploited and the exploiters, the dominant and dominated, managers and workers--between which, in each individual case, it would be possible to differentiate. The front line no longer cuts through the middle of society; it now runs through each one of us..."--from This Is Not a ProgramTraditional lines of revolutionary struggle no longer hold. Rather, it is ubiquitous cybernetics, surveillance, and terror that create the illusion of difference within hegemony. Configurations of dissent and the rhetoric of revolution are merely the other face of capital, conforming identities to empty predicates, ensuring that even "thieves," "saboteurs," and "terrorists" no longer exceed the totalizing space of Empire. This Is Not a Program offers two texts, both originally published in French by Tiqqun with Introduction to Civil War in 2001.In "This Is Not a Program," Tiqqun outlines a new path for resistance and struggle in the age of Empire, one that eschews the worn-out example of France's May '68 in favor of what they consider to be the still fruitful and contemporary insurrectionary movements in Italy of the 1970s. "As a Science of Apparatuses" examines the way Empire has enforced on the subject a veritable metaphysics of isolation and pacification, "apparatuses" that include chairs, desks, computers; surveillance (security guards, cameras); disease (depression); crutch (cell phone, lover, sedative); and authority. Tiqqun's critique of the biopolitical subject and omnipresent Empire is all the more urgent as we become inured to the permanent state of exception that is the War on Terror and to other, no less intimate forms of pacification. But all is not lost. In its unrelenting production of the Same, Empire itself creates the conditions necessary for the insurrection to come.

To av tekstene finnes på engelsk i This is not a progam, Semiotext(e), mai 2011. 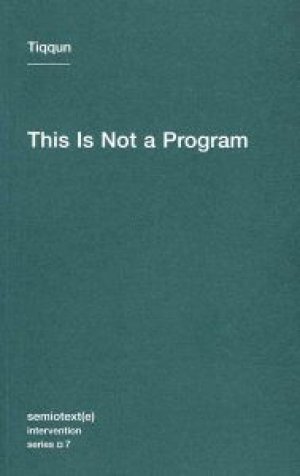 Camille de Toledo
Coming of Age at the End of History
Salg!

Tiqqun
Preliminary Materials for a Theory of the Young-Girl

Tiqqun
Preliminary Materials for a Theory of the Young-Girl