Life and death are wearing me out

Ximen Nao, a landowner known for his generosity and kindness to his peasants, is not only stripped of his land and worldly possessions in Mao's Land Reform Movement of 1948, but is cruelly executed, despite his protestations of innocence. He goes to Hell, where Lord Yama, king of the underworld, has Ximen Nao tortured endlessly, trying to make him admit his guilt, to no avail. Finally, in disgust, Lord Yama allows Ximen Nao to return to earth, to his own farm, where he is reborn not as a human but first as a donkey, then an ox, pig, dog, monkey, and finally the big-headed boy Lan Qiansui. Through the earthy and hugely entertaining perspectives of these animals, Ximen Nao narrates fifty years of modern Chinese history, ending on the eve of the new millennium. Here is an absolutely spellbinding tale that reveals the author's love of the land, beset by so many ills, traditional and modern. 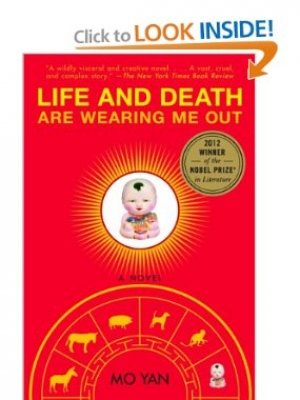