Black Transparency: The Right to Know in the Age of Mass Surveillance

Black transparency is an involuntary disclosure of secrets against a backdrop of systematic online surveillance, as large parts of contemporary life move into the digital realm. Black transparency, as a radical form of information democracy, has brought forward a new sense of unpredictability to international relations, and raises questions about the conscience of the whistleblower, whose personal politics are now instantly geopolitical. Empowered by networks of planetary-scale computation, disclosures today take on an unprecedented scale and immediacy. Difficult to contain and even harder to prevent, black transparency does not merely create openness, order, and clarity; rather, it triggers chaos, stirring the currents of a darker and more mercurial world.

Metahaven was founded in 2007 by Vinca Kruk and Daniel van der Velden. In Black Transparency—part essay, part fanzine—Metahaven embark on a journey of subversion, while examining transparency’s intersections with design, architecture, and pop culture, as well as its ability to unravel the circuitry of modern power. 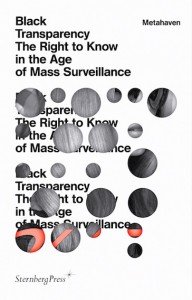