The Autobiography of Video: The Life and Times of a Memory Technology

In this innovative take on early video art, Ina Blom considers the widespread notion that analog video was endowed with lifelike memory and agency. Reversing standard accounts of artistic uses of video, she follows the reflexive unfolding of a technology that seemed to deploy artists and artistic frameworks in the creation of new technical and social realities. She documents, among other things, video’s emergence through the framework of painting, its identification with biological life, its exploration of the outer limits of technical and mental time control, and its construction of new realms of labor and collaboration. Enlisting a distinctly media-archaeological approach, Blom’s new book—her second from Sternberg Press—is a brilliant look at the relationship between video memory and social ontology.

This is a phosphorescently brilliant exploration of the birth and life of video. In the times when electronic media meant the flow of televisual signals, video became a uniquely glimmering force of idiosyncratic memory and the ordination of time. Blom’s focused beam of histories and ideas superlatively traces the crackling and flickering scanlines of this new reality as it came into being in art. —Matthew Fuller, author and professor at the Centre for Cultural Studies, Goldsmiths, University of London

With this extraordinary study, early video has finally found its chronicler. Invaluable not only for its perspicacious genealogy of media-art practice, but for its inspired historiographic gambit, wherein both art and history are reimagined in light of contemporary media archaeology. —Andrew V. Uroskie, author of Between the Black Box and the White Cube: Expanded Cinema and Postwar Art 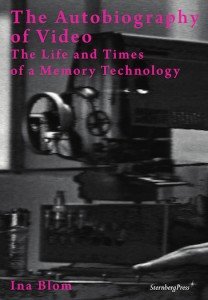 Ina Blom
On the Style Site