We have entered a post-post-studio age, and find ourselves with a new studio model: the transdisciplinary. Artists and designers are now defined not by their discipline but by the fluidity with which their practices move between the fields of architecture, art, and design. This volume delves into four pioneering transdisciplinary studios—Jorge Pardo Sculpture, Konstantin Grcic Industrial Design, Studio Olafur Eliasson, and Åbäke—by observing and interviewing the practitioners and their assistants. A further series of interviews with curators, critics, anthropologists, designers, and artists serves to contextualize the transdisciplinary model now at the fore of creative practice.

The Transdisciplinary Studio is the first volume of a series of books by Alex Coles on the expanded studio model and contemporary praxis.

Design by Surface, Frankfurt am Main/Berlin 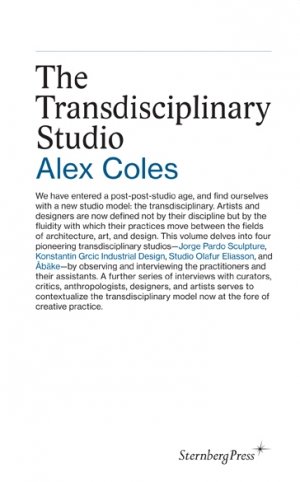 Alex Coles
Platform for Art: Art on the Underground