Ian Hamilton Finlay (1925–2006) was an acclaimed Scottish poet, writer, artist and gardener. His son Alec Finlay who has edited and written a foreword to Selections is an artist and poet.

This volume surveys the life and work of Ian Hamilton Finlay, who is best known for his extraordinary garden, Little Sparta, a unique “poem of place” in which poetry, sculpture, and horticulture intersect. This book directs sustained attention to Finlay the verbal artist, revealing the full breadth and richness of his poetics. It illuminates the evolution from his early years of composing plays, stories, and lyrical poems to his discovery of Concrete poetry and his emergence as a key figure in the international avant-garde of the 1960s.

"Ian Hamilton Finlay was an entirely original, and continuously challenging, voice in the poetry of the English-speaking world over the second half of the twentieth century. This promises to be the first book in which his early verse, his concrete poetry and his distinctive compilations of aphorisms and ‘sentences’ are all substantially represented." —Stephen Bann, author of Ways Around Modernism

“While Ian Hamilton Finlay’s career is one of complexity, as a creator he was a champion of the simple. Engaging regional melodies, quotidian objects, and native terrain, he took poetry back to its Greek root, ‘to make.’ This half-century journey—from folk poem to concrete poem to poem-in-the-world—is at all points filled with a vital restlessness.” —Lisa Jarnot, author of Night Scenes

“One must never forget that poets are makers, most vividly so in Scotland, where William Dunbar’s ‘Lament for the Makaris’ must still echo with uncanny poignance. Poetry is ‘a made thing’, as Robert Duncan put it. No poet will ever manage a word, much less a line, without all the resources of that art in timeless history sounding there, as each word finds its place in turn. There is no way to learn simply the intimacy of voice that Finlay has always, bringing one in to his physical person. It is a constant of his art in all its forms.” —Robert Creeley, from the foreword to the 1996 edition of Ian Hamilton Finlay’s The Dancers Inherit the Party and Glasgow Beasts, an a Burd


The printface is faint, the paper cheap, but at least we finally have a good selection of this major poet, with a great introduction by his son Alec. From the early concrete poetry to the making of the garden Little Sparta, it’s all here and should give Finlay a much bigger audience. 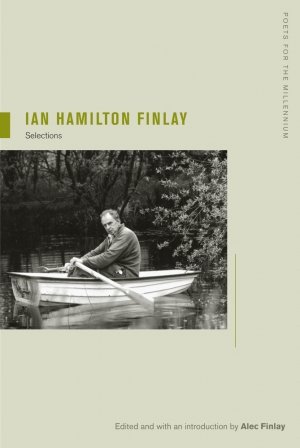 Emmanuel Hocquard
A Test of Solitude