Revolution of the Ordinary: Literary Studies After Wittgenstein, Austin, and Cavell

This radically original book argues for the power of ordinary language philosophy a tradition inaugurated by Ludwig Wittgenstein and J. L. Austin, and extended by Stanley Cavell to transform literary studies. In engaging and lucid prose, Toril Moi demonstrates this philosophy's unique ability to lay bare the connections between words and the world, dispel the notion of literature as a monolithic concept, and teach readers how to learn from a literary text. Moi first introduces Wittgenstein's vision of language and theory, which refuses to reduce language to a matter of naming or representation, considers theory's desire for generality doomed to failure, and brings out the philosophical power of the particular case. Contrasting ordinary language philosophy with dominant strands of Saussurean and post-Saussurean thought, she highlights the former's originality, critical power, and potential for creative use. Finally, she challenges the belief that good critics always read below the surface, proposing instead an innovative view of texts as expression and action, and of reading as an act of acknowledgment.Intervening in cutting-edge debates while bringing Wittgenstein, Austin, and Cavell to new readers, Revolution of the Ordinary will appeal beyond literary studies to anyone looking for a philosophically serious account of why words matter. 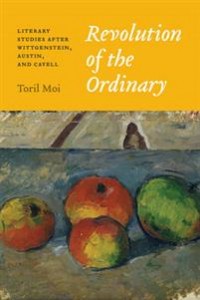