Michel Foucault had been concerned about painting and the meaning of the image from his earliest publications, yet this aspect of his thought is largely neglected within the disciplines of art history and aesthetic theory. In Foucault on Painting, Catherine M. Soussloff argues that Foucault’s sustained engagement with European art history critically addresses present concerns about the mediated nature of the image in the digital age.

Foucault’s writing on painting covers four discrete periods in European art history (seventeenth-century southern Baroque, mid-nineteenth century French painting, Surrealism, and figurative painting in the 1960s and ‘70s) as well as five individual artists: Velázquez, Manet, Magritte, Paul Reyberolle, and Gérard Fromanger. As Soussloff reveals in this book, Foucault followed a French intellectual tradition dating back to the seventeenth century, which understands painting as a separate area of knowledge. Painting, a practice long considered silent in its operations and effects, afforded Foucault an ideal discipline to think about history and philosophy simultaneously. Using a comparative approach grounded in art history and aesthetics, Soussloff explores the meaning of painting for Foucault’s philosophy, and for contemporary art theory, proposing a new relevance for a Foucauldian view of ethics and the pleasures and predicaments of contemporary existence.

Catherine M. Soussloff is professor of art history, visual art, and theory at the University of British Columbia. She is editor of Foucault on the Arts and Letters and author of The Absolute Artist (Minnesota, 1997). 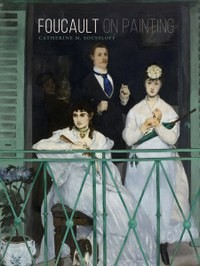