“Herzog doesn’t write traditional scripts,” Film International remarked of the master filmmaker’s Scenarios I and II. “Instead, he writes scenarios which are like a hybrid of film, fiction, and prose poetry.”

Continuing a series that Publishers Weekly pronounced “compulsively readable . . . equal parts challenging and satisfying, infuriating and enlightening,” Scenarios III presents, for the first time in English, the shape-shifting scripts for four of Werner Herzog’s early films: Stroszek; Nosferatu, Phantom of the Night; Where the Green Ants Dream; and Cobra Verde. We can observe Herzog’s working vision as each of these scenarios unfolds in a form often dramatically different from the film’s final version—as, in his own words, Herzog works himself up into “this kind of frenzy of high-caliber language and concepts and beauty.”

With Scenarios I and II, this volume completes the picture of Herzog’s earliest work, affording a view of the filmmaker mastering his craft, well on his way to becoming one of the most original, and most celebrated, artists in his field. 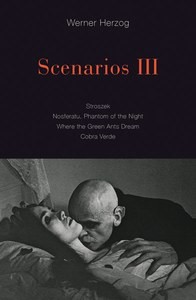