Poets of the Chinese Revolution

How poetry and revolution meshed in Red China.

The Chinese Revolution was a complex and protracted event staged by competing groups and individuals with different hopes and expectations. Its veterans included many poets, four of whom feature in this anthology. Poetry has played a different role in China—and in the Chinese Revolution—than in the West. In the Chinese tradition, poetry is collective and collaborative. But, in life, the four poets in this collection were entangled in opposition and, at times, regarded one another with bitter hostility.

The four poets, whose work is collected in English translation here alongside the Chinese originals, all wrote in the classical style, but their poetry was no less diverse than their politics. Chen Duxiu led China’s early cultural awakening before founding the Communist Party in 1921. Mao Zedong led the party to power in 1949. Zheng Chaolin, Chen Duxiu’s disciple and, like him, a convert to Trotskyism, spent thirty-four years in jail, first under the Nationalist regime and then under their Maoist nemeses. The guerrilla leader Chen Yi wrote flamboyant and descriptive poems in mountain bivouacs and in the heat of battle. Together, the four poets illustrate the complicated relationship between the Communist Revolution and Chinese cultural traditions.

“While poetry for sure has, as T. S. Eliot noticed, a stubborn relationship to nationalism, the list of revolutionaries who are also poets is long and robust. This book collects the work of four Chinese poet-revolutionaries Chen Duxiu, Zheng Chaolin, Chen Yi, and Mao Zedong. All of them were using poetry’s long traditional formalism and conventions so as to wrestle with and better understand the upheavals of the Communist revolution. The complications of their work have for too long been overlooked in the endless debates about poetry and politics that define our contemporary moment. There is much that is crucial in these beautifully done translations.”

– Juliana Spahr, author of Well Then There Now 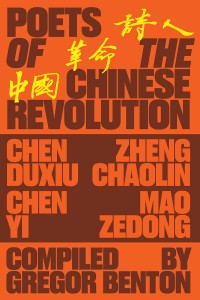