While Standing in Line for Death

Winner of the 30th Annual Lambda Literary Award for Gay Poetry"From these rituals come notes; from those notes come poems; and from those poems comes not just a view into his process, but an entrance into another present." Boston GlobeAfter his boyfriend Earth's murder, CAConrad was looking for a (Soma)tic poetry ritual to overcome his depression. This new book of eighteen rituals and their resulting poems contains that success, along with other political actions and exercises that testify to poetry's ability to reconnect us and help put an end to our alienation from the planet.unfastenedin the backseat aportion of the music ismucus flying into stillnessat what point do we submitto the authority of flowersat what point after it entersthe mouth is it no longer in themouth but the throat the colonmaking sumptuous death of the worldthis is what crossing the line gainsno need to pretend weare the people wewant to be inthe next lifebone undertongue drivestaste of snow to metal CAConrad is the author of ECODEVIANCE: (Soma)tics for the Future Wilderness, A Beautiful Marsupial Afternoon, and The Book of Frank, as well as several other books of poetry and essays. Most recently, he has co-edited Supplication: Selected Poems of John Wieners. A 2014 Lannan Fellow, a 2013 MacDowell Fellow, and a 2011 Pew Fellow, he also conducts workshops on (Soma)tic poetry and Ecopoetics. 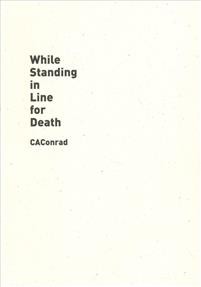