If anthropology consists of making the apparently wild thought of others logically compelling in their own cultural settings and intellectually revealing of the human condition, then David Graeber is the consummate anthropologist. Not only does he accomplish this profound feat, he redoubles it by the critical task--now more urgent than ever--of making the possibilities of other people's worlds the basis for understanding our own.- --Marshall Sahlins, University of Chicago

Graeber's ideas are rich and wide-ranging; he pushes us to expand the boundaries of what we admit to be possible, or even thinkable.---Steven Shaviro, Wayne State University

In this new collection, David Graeber revisits questions raised in his popular book, Fragments of an Anarchist Anthropology. Written in an unpretentious style that uses accessible and entertaining language to convey complex theoretical ideas, these twelve essays cover a lot of ground, including the origins of capitalism, the history of European table manners, love potions in rural Madagascar, and the phenomenology of giant puppets at street protests. But they're linked by a clear purpose: to explore the nature of social power and the forms that resistance to it have taken, or might take in the future.

Anarchism is currently undergoing a worldwide revival, in many ways replacing Marxism as the theoretical and moral center of new revolutionary social movements. It has, however, left little mark on the academy. While anarchists and other visionaries have turned to anthropology for ideas and inspiration, anthropologists are reluctant to enter into serious dialogue. David Graeber is not. These essays, spanning almost twenty years, show how scholarly concerns can be of use to radical social movements, and how the perspectives of such movements shed new light on debates within the academy.

David Graeber has written for Harper's Magazine, New Left Review, and numerous scholarly journals. He is the author or editor of four books and currently lives in New York City.

In Oakland, California on March 24, 2015 a fire destroyed the AK Press warehouse along with several other businesses. Please consider visiting the AK Press website to learn more about the fundraiser to help them and their neighbors. 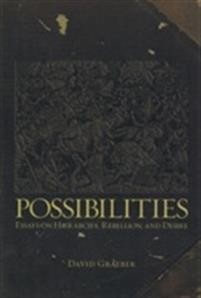 David Graeber og David Wengrow
The Dawn of Everything

David Graeber
The Utopia Of Rules