Capital in the twenty-first century

What are the grand dynamics that drive the accumulation and distribution of capital? Questions about the long-term evolution of inequality, the concentration of wealth, and the prospects for economic growth lie at the heart of political economy. But satisfactory answers have been hard to find for lack of adequate data and clear guiding theories. In Capital in the Twenty-First Century, "Thomas Piketty analyzes a unique collection of data from twenty countries, ranging as far back as the eighteenth century, to uncover key economic and social patterns. His findings will transform debate and set the agenda for the next generation of thought about wealth and inequality. Piketty shows that modern economic growth and the diffusion of knowledge have allowed us to avoid inequalities on the apocalyptic scale predicted by Karl Marx. But we have not modified the deep structures of capital and inequality as much as we thought in the optimistic decades following World War II. The main driver of inequality--the tendency of returns on capital to exceed the rate of economic growth--today threatens to generate extreme inequalities that stir discontent and undermine democratic values. But economic trends are not acts of God. Political action has curbed dangerous inequalities in the past, Piketty says, and may do so again. A work of extraordinary ambition, originality, and rigor, Capital in the Twenty-First Century "reorients our understanding of economic history and confronts us with sobering lessons for today.

«Thomas Piketty who spent long years, during which the mainstream neglected inequality, mapping the distribution of income is making waves with Capital in the 21st Century. Nodding at Marx, that title helps explain the attention, but his decidedly classical emphasis on historical dynamics in determining who gets what resonates in a world where an increasing proportion of citizens are feeling fleeced by the elite.» -- The Guardian

«French economist Thomas Piketty has written an extraordinarily important book. Open-minded readers will surely find themselves unable to ignore the evidence and arguments he has brought to bear.» -- Martin Wolf, Financial Times

«If you haven’t heard of Thomas Piketty, the chances are you will before long. A French economist turning in a book of 640 closely-argued pages might not sound like author of the month, but Capital in the Twenty-First Century is one of those works that catches a moment.» --Ian Bell, Glasgow Herald

«Thomas Piketty is the rock star economist on a mission to redistribute wealth…One of the strength’s of Piketty’s book is the depth and rigour of his historical analysis» -- Andrew Neather, Evening Standard

«Piketty has won interest and enthusiasm on the left of the political spectrum, including advisers to Ed Miliband, for this ambitious work.» -- Oliver Kamm, The Times 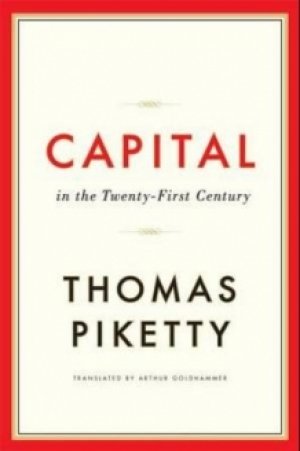