Merz Structure No. 2 Burnt by Children at Play Kennedy

MERZ STRUCTURE NO. 2 BURNT BY CHILDREN AT PLAY is comprised of a number of individual poems—from love lyrics to conceptual elegies, from prompts for improvised performance poems to long poems that meditate on grief. The overarching theme of the book is loss. In 1981 Jake Kennedy accidentally burnt down an abandoned house. Years later as an adult, he read a story about how Kurt Schwitters' "interior house-sculpture" ("Merz Structure No. 2") was destroyed in 1951 after some children playing with matches accidentally burnt the building down. This sad 'unmaking,' so similar in nature to his own haunting experience, became the inspiration for MERZ STRUCTURE NO. 2 BURNT BY CHILDREN AT PLAY, a collection of experimental poetry that explores the dynamic, if often unsettling, relationship between making and unmaking, bliss and pain, utterance and silence.

Jake Kennedy is the author of three poetry collections: The Lateral (2010), APOLLINAIRE'S SPEECH TO THE WAR MEDIC (BookThug, 2011), and MERZ STRUCTURE NO. 2 BURNT BY CHILDREN AT PLAY KENNEDY (BookThug, 2015). His work has appeared in literary journals across Canada, the US, and the UK, including The Capilano Review, McSweeney's Internet Tendency, and The Awl. Kennedy is the recipient of the bpNichol Chapbook Award for HAZARD (BookThug, 2007), the Robert Kroetsch Award for Innovative Poetry for The Lateral (2010), and the Robin Blaser Award for Poetry for the long poem "Futuromani" (2011). He also received a BC Arts Council Writing Grant in 2013. Kennedy lives in Kelowna, BC, where he teaches English literature and creative writing at Okanagan College. 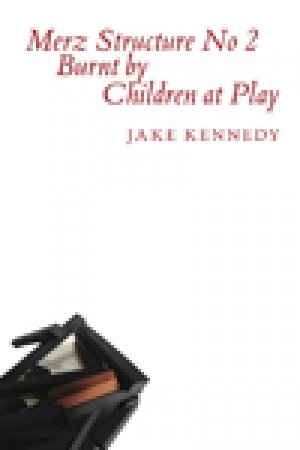