NILLING is a sequence of five loosely linked prose essays about noise, pornography, the codex, melancholy, Lucretius, folds, cities and related aporias: in short, these are essays on reading.I have tried to make a sketch or a model in several dimensions of the potency of Arendt's idea of invisibility, the necessary inconspicuousness of thinking and reading, and the ambivalently joyous and knotted agency to be found there. Just beneath the surface of the phonemes, a gendered name rhythmically explodes into a founding variousness. And then the strictures of the text assert again themselves. I want to claim for this inconspicuousness a transformational agency that runs counter to the teleology of readerly intention. Syllables might call to gods who do and don't exist. That is, they appear in the text's absences and densities as a motile graphic and phonemic force that abnegates its own necessity. Overwhelmingly in my submission to reading's supple snare, I feel love. 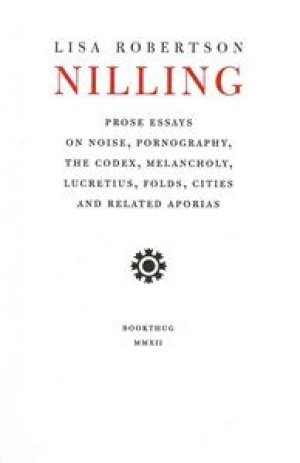