Breaking fresh ground in Woolfian scholarship, this study presents a timely and compelling interpretation of Virginia Woolf's textual treatment of the relationship between self and world from the perspective of the philosophy of Martin Heidegger. Drawing on Woolf's novels, essays, reviews, letters, diary entries, short stories, and memoirs, the book explores the political and the ontological, as the individual's connection to the world comes to be defined by an involvement and engagement that is always already situated within a particular physical, societal, and historical context.

Emma Simone argues that at the heart of what it means to be an individual making his or her way in the world, the perspectives of Woolf and Heidegger are founded upon certain shared concerns, including the sustained critique of Cartesian dualism, particularly the resultant binary oppositions of subject and object, and self and Other; the understanding that the individual is a temporal being; an emphasis upon intersubjective relations insofar as Being-in-the-world is defined by Being-with-Others; and a consistent emphasis upon average everydayness as both determinative and representative of the individual's relationship to and with the world. 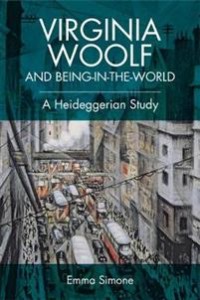