'Around that time my daughter and I had this exchange:

Anne, imagine if the world had nothing in it.

Do you mean nothing at all - just darkness - or a world without objects?

I mean a world without things: no houses, chairs, or cars. A world with only people and trees and dirt.

What do you think would happen?

When the cold comes, when our needs announce themselves, it is with clothing, with possessions, in literature, through dreams - in all the forms and categories that shape, contain and constrain - that we keep ourselves alive. Yet, in a society in which some are rich and some are poor, who gets to dream, and who invents our forms? This is a book made of money and the lack of money; of writing and of not-writing; of illness and of care; of low-rent apartments, cake-baking mothers, Socratic daughters and bodies that refuse to become information.

Anne Boyer is a U.S. poet and essayist and, for Garments Against Women, the winner of the 2016 CLMP Firecracker Award, a 2018 Whiting Award and the inaugural 2018 Cy Twombly Award. Her other books include The Romance of Happy Workers (2008) and A Handbook of Disappointed Fate (2018). She is the Judith E. Wilson Fellow at Cambridge for 2018-2019. The Undying, a memoir of cancer treatment and its aftermath, is forthcoming from Penguin in August 2019. 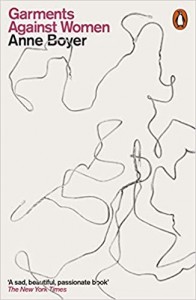