Life with a Capital L: Essays Chosen and Introduced by Geoff Dyer

In Life with a Capital L, Geoff Dyer has selected some of [Lawrence's] most fascinating and accessible pieces to tempt new readers. Comedy and humour abound, as does a provocative honesty. [...] There are countless examples in this volume of Lawrence at his poetic best. (Gerri Kimber Times Literary Supplement)

Geoff Dyer is the author of four novels and numerous non-fiction books, including But Beautiful, which was awarded the Somerset Maugham Prize, and Out of Sheer Rage, which was a National Book Critics Circle Award finalist. The winner of a Lannan Literary Award, the International Centre of Photography's 2006 Infinity Award for writing on photography, the American Academy of Arts and Letters' E. M. Forster Award, a National Book Critics Circle Award for Criticism and a Windham-Campbell Prize for non-fiction, Dyer is a regular contributor to many publications in the UK and the US. He lives in California. 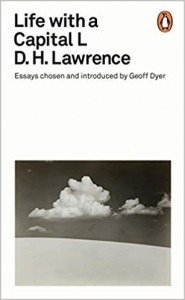 D. H. Lawrence
The Vicar's Garden and Other Stories