Letters to a Priest

Letter to a Priest encapsulates the sharp wit and questioning nature of Simone Weil. Regarded by Susan Sontag as 'one of the most uncompromising and troubling witnesses to the modern travail of the spirit', Weil grips the moral imagination as few others before or since. She was only thirty four when she died in 1943, yet despite her short life she left behind an incredible body of literature. Letter to a Priest, addressed to Father Joseph-Marie Perrin, a Catholic priest who Weil met in Marseilles, is one of her most powerful pieces. Written at a time when those who knew her considered her to be 'like a soul in torment whose thinking had all the signs of a deep inner conflict', it contains thirty five powerful expressions of opinion on matters concerning Catholic faith, dogma and institutions. Vehement and controversial, yet eloquent and moving, it is essential reading for anyone who has questions about faith and belief. 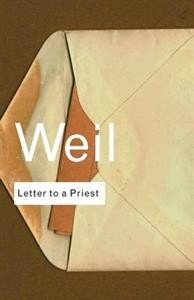 Simone Weil
On the Abolition of All Political Parties