Goldsmith's magnum opus No.111 2.7.93-10.20.96 follows No.109 in collecting phrases ending in "r" sounds, but in this instance over a three year period, resulting in over 600 pages of text. Like his previous work in word collection, No.111 begins with single syllable words, and increases by one syllable in each section, until it reaches a conclusion of 7,228 syllables. As in the poetry of Andrews, No.111 excels at startling juxtapositions of obscenity, pop cultural references, idiosyncratic slang, and generational buzzwords. Amazingly comprehensive and wide-ranging in its references (including the just-emerging internet culture and its lingo) No.111 is - if we are to use such Poundian definitions as being the "tale of the tribe" or "a poem containing history" - the last significant epic poem of the 20th century.

Few living American poets have so thoroughly absorbed, and cleverly responded to, the avant-garde traditions in visual art and poetry - including Dada, Futurism, Concretism, Fluxus, and Conceptual Art - as Kenneth Goldsmith. With influences ranging from John Cage and Andy Warhol to contemporary hip hop and internet artists, Goldsmith has pushed the limits of late twentieth century poetics to both reinvigorate and pioneer aspects of visual poetry, sound poetry, the list poem, and digital poetics. If it is true, as Brion Gysin once remarked, that innovations in writing lag 50 years behind those of visual art, Goldsmith has steadfastly worked to bring the form up to date with the accomplishments of conceptual and performance art.


Goldsmith is well known for his appropriation of the New York Times (Day) and the trilogy, WEATHER, TRAFFIC, SPORTS, but before he wrote in his appropriative mode, he wrote the wonderfully funny and complicated rule-governed text called No. 111, where he moves all the way from single syllables to D. H. Lawrence’s The Rocking-Horse Winner, using all words that end with the sound schwa (er). 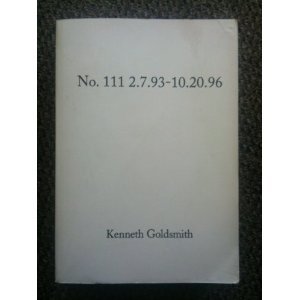