B and/or an Exhibition Guide in Search of its Exhibition

ABCDEFGHIJKLMNOPQRSTUVWXYZ. Let us be deceived, but let us stay realistic — what looks like a simple line of capital letters in alphabetical order may also be a poem by Aram Saroyan (b. 1943) or Ian Hamilton Finlay (1925–2006), entitled STEAK (1968) and Arcady (1977) respectively. Artist Fiona Banner (b. 1966) also uses these 26 letters to make a neon alphabet that she titles as Every Word Unmade (2007), and then proposes to ‘unmake every word, or story imaginable’. Which of the works were you reading as you were reading this ‘simple line of capital letters in alphabetical order’? All three and more? With all these works we may as well curate an exhibition, shouldn’t we?

‘Why is the alphabet in that order? Is it because of that song? The guy who wrote that song wrote everything’, pronounces American stand-up comedian Stephen Wright (b. 1955), while French poet Louis Aragon (1897–1982) explores other options; Aragon uses the same material but very different techniques — all the letters appear in lowercase and split into rows to complete an arguably less ambitious poem Suicide (1920):

Not everyone starts learning a new foreign language with an alphabet. Though, however you start it, whether by repetition or by quoting, ‘the moment one learns English, complications set in’, Catalan American writer Felipe Alfau (1902–1999) opens his novel Chromos (1990). In 2010, Swedish sculptor and poet Karl Larsson (b. 1977) publishes his poetry book Parrot; here he reveals a parroting technique of using a foreign language, language of the other, to create something he can’t completely comprehend. Indeed, is one actually able to comprehend language completely, non-parrot-like?

This is the opening of Valentinas Klimašauskas first English book B and/or an Exhibition Guide in Search of its Exhibition. In it he is using imaginary or language based artworks and artefacts by various, including, fictional artists to stage situations for written exhibitions that might be set or located in someone’s head, Palaeolithic Chauvet cave, a collage of footnotes, floating in memory or the outer Solar system with Voyager 1, to mention a few.

Valentinas Klimašauskas is a curator and a writer who curates texts and writes shows. While being interested in speculative economies of language, he is into linking concepts & readers into language based performative systems. He lives and works in Athens and Vilnius.

With texts by Laura Kaminskaitė and Elena Narbutaitė. 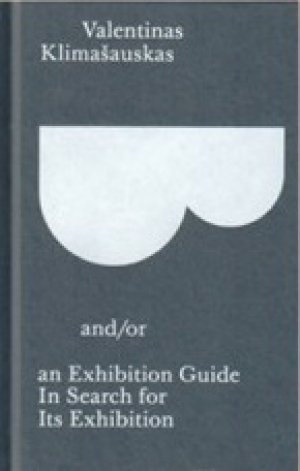