Poetry. Women's Studies. UTOPIA PIPE DREAM MEMORY builds upon impossible imagined intimacies, relishing the pleasure of slow, attentive learning. In an unfolding of rhythms, repetitions, and distended narratives it envisions a space of play and ecstatic influence, drawing characters such as Gertrude Stein, Bernadette Mayer and Maya Deren into dialogues and visions that articulate the tension between embodiment and voice, identification and materiality. These narratives push towards a unified dispersal, a complex act of exultant feminine chaos, letting slip the boundaries between what is animal, what is describable, and what can be made to appear.

"UTOPIA PIPE DREAM MEMORY is a plethora of wonder and exuberance. Anna Gurton-Wachter, 'in her woman treasure form,' has conjured a lush and evocative new wave of feminist thinking where subject and object are erotic enablers and the spell cast by narration is our ecological surround redoubled, brimming with potent and unbounded fascination. She rethinks from inside the juggernaut what a sociology of the imagination can look like. I adore the perverse transparency of mesmerizing similitudes and divergences that tug at each other, at perception and at the reader's third eye, fixated on desire's embodied visions. Anna's capacity for a theatrics of iconoclastic reverie is in a league of its own."—Brenda Iijima 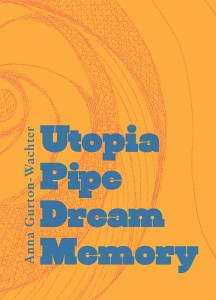