Peter Sahlins’s brilliant new book reveals the remarkable and understudied “animal moment” in and around 1668 in which authors (including La Fontaine, whose Fables appeared in that year), anatomists, painters, sculptors, and especially the young Louis XIV turned their attention to nonhuman beings.

At the center of the Year of the Animal was the Royal Menagerie in the gardens of Versailles, dominated by exotic and graceful birds. In the remarkable unfolding of his original and sophisticated argument, Sahlins shows how the animal bodies of the menagerie and others (such as the dogs and lambs of the first xenotransfusion experiments) were critical to a dramatic rethinking of governance, nature, and the human.

The animals of 1668 helped to shift an entire worldview in France — what Sahlins calls Renaissance humanimalism — toward more modern expressions of Classical naturalism and mechanism. In the wake of 1668 came the debasement of animals and the strengthening of human animality, including in Descartes’s animal-machine, highly contested during the Year of the Animal.

“Both philosophical and erudite history, Sahlins’s book is as entertaining as it is original.” – Anthony T. Grafton 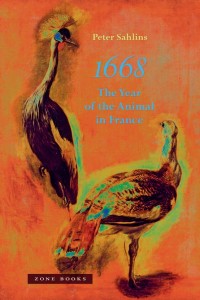