Subjektiv’s fulcrum is the potential relationship between art, politics and subjectivity at a time when the basis of democratic subjecthood is being called into question. One of our early editorial meetings took place the day after the US presidential election and its unexpected outcome impacted our conversation. This two-part issue and its accompanying exhibition result from a collaborative, inherently subjective dialogue between the five members of the editorial board. Part one features individual presentations of the nine artists’ work and words. Part two will present recent critical perspectives on the issues at stake. We have brought together artworks from the last few years that speak to the current political situation through their strategic staging of subjectivity and its political potential or impotence. In this context, the usual title of the journal simply wouldn’t do, hence its temporary rebranding as Subjektiv.

While there is a sense that the shared public space of politics is being overwhelmed by affective content, we are simultaneously witnessing a reinvigoration of the power of the collective and the resolve of communities. The exhibition and accompanying journal issues explore questions of what subjektiv might mean in this context. How do we apportion our attention when our media feeds include traditional journalism, internet gossip, propaganda, and the opinions of friends and family? What’s at stake when subjective criteria and utterances have entered the political environment at a completely new scale?

These questions connect in fundamental ways with our understanding of the camera as subjective narrator and technology of perception, both in the history of photography and in today’s realm of the scroll. While some works question how personhood is defined, negotiated, and legislated through photographic representation, others reflect on the discrepancy between physically grounded and immaterial ways of existing as humans, and on how deeply embedded we are in other life networks and ecologies. The self is no longer necessarily understood as singular; we acknowledge the extension and molding of subjectivity via screens and technologies and via myriad other practices: consuming, naming, performing, branding, liking, hosting, acting, and mimicking.

Sandra Mujinga (NO) reflects upon what she terms the poly-body in her investigations of the digital self. Sara Cwynar (CA) explores the finely tuned shaping of subjectivity through the circulation and valuation of objects and images, often addressing feminist issues and what she calls a soft misogyny. Deana Lawson (US) creates multifaceted representations of black iconography, describing her work as negotiating knowledge of selfhood through a corporeal dimension. The collage project ALBUM by Eline Mugaas and Elise Storsveen (NO) offers a highly subjective take on photographic representations of gender, sex, and the concept of care. Liz Magic Laser (US) uses the format of the TED Talk in a film installation featuring a ten-year-old actor delivering a monologue adapted from Fyodor Dostoyevsky’s Notes from Underground. In this way, her work relates the author’s attack on the socialist ideal of enlightened self-interest to contemporary capitalist thinking. Another film installation by Basma Alsharif (US) addresses both the stateless self and mass-mediated representations of trauma at the Gaza Strip. Zoe Leonard (US) addresses displacement and statelessness as both an individual experience and a shared social condition. Josephine Pryde (UK) speaks of another form of displacement in her series It’s not my body, which superimposes found, low-resolution MRI scans of a human embryo in the womb against desert landscapes shot through tinted filters. She engages multiple definitions of “reproduction” and their impact on political debates about subjecthood and a woman’s right to choose.

Zoe Leonard’s (US) iconic queer-feminist text I Want a President functions as Subjektiv’s point of departure. Written in 1992, the work poignantly portrays the cultural and political climate in New York during that time. Twenty-five years later, the political climate in Europe and North America has generated renewed attention for Leonard’s text. Taken together, the artworks in Subjektiv call for recognition of a multifaceted political subject at this charged historical moment. The journal issues and exhibition also reflect upon the ways in which photographs create subjectivities and inform the relationship between public and private life.

Objektiv would like to thank Malmö Konsthall’s director Mats Stjernstedt, who generously invited us to make an exhibition on these themes, opening on the 2nd of June. The exhibited version of Subjektiv is a collaboration with Kunstnernes Hus in Oslo, where it will appear this autumn. 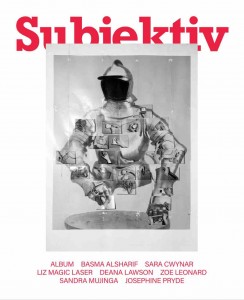