A collection of twelve formally distinct poems collaboratively written by Jack Collom and Lyn Hejinian. The two poets began working together in 1992, and over the years they have developed a repertoire of forms and procedures, all intended to extend the possibilities for invention, play, and the unfolding of unforeseeable meaning. Both poets embrace collaborative authorship as a means of challenging aesthetic preconceptions. In the process, they frequently venture across thematic limits, discovering unexpected coherences. The poems often give themselves over to pleasure, but they are governed by the logic of poetic language and they carry considerable metaphysical depth.

Jack Collom is the author of seventeen small-press books of poetry, including "Red Car Goes By" (Tuumba Press, 2001) and two CDs. He spent the early 1980s in New York, where he taught poetry to children in the Poets In Public Service and Teachers & Writers programs. In 1980 and again in 1990 he was awarded a fellowship in poetry by the National Endowment for the Arts. Collom lives and teaches in Boulder, Colorado.

Published collections of Lyn Hejinian's writing include "Writing Is an Aid to Memory," "My Life," and "The Language of Inquiry." From 1976 to 1984, Hejinian was the editor of Tuumba Press; she is currently the co-director of Atelos, a literary project commissioning and publishing cross-genre work by poets. In the fall of 2000, she was elected the sixty-sixth fellow of The Academy of American Poets. She teaches at the University of California, Berkeley. 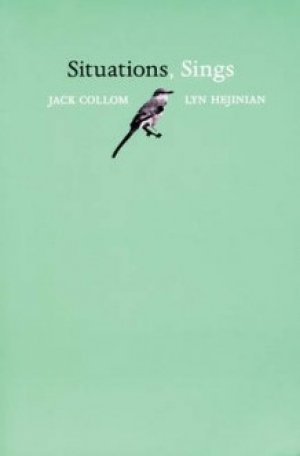 Lyn Hejinian
My Life and My Life in the Nineties