Groundbreaking essays that introduce Guattari's theories of "schizo-analysis," in an expanded edition.Chaosophy is an introduction to Felix Guattari's groundbreaking theories of "schizo-analysis": a process meant to replace Freudian interpretation with a more pragmatic, experimental, and collective approach rooted in reality. Unlike Freud, who utilized neuroses as his working model, Guattari adopted the model of schizophrenia-which he believed to be an extreme mental state induced by the capitalist system itself, and one that enforces neurosis as a way of maintaining normality. Guattari's post-Marxist vision of capitalism provides a new definition not only of mental illness, but also of the micropolitical means for its subversion. Chaosophy includes such provocative pieces as "Everybody Wants to Be a Fascist," a group of texts on Guattari's collaborative work with Gilles Deleuze (including the appendix to Anti-Oedipus, not available in the English edition), and "How Martians Make Love," a roundtable discussion with Guattari, Lotringer, Catherine Clement, and Serge Leclaire from 1972 (still unpublished in French). This new, expanded edition features a new introduction by Francois Dosse (author of a new biography of Guattari and Gilles Deleuze) and a range of additional essays, including "Franco Basaglia: Guerrilla Psychiatrist," "The Transference," "Semiological Subjection, Semiotic Enslavement," "The Place of the Signifier in the Institution," and "Three Billion Perverts on the Stand." 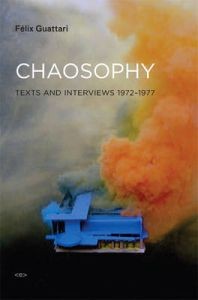